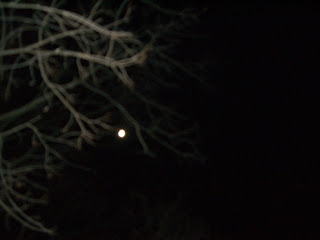 God gave us a special gift this year--a glimpse of Mars--readily visible to the naked eye on Christmas Eve. All the kids were here and we took a break from our feasting and board games to go outside and look for it. It wasn't hard to find! It was big, red and amazing, especially with the full moon following it across the wintry sky all evening. The heavens truly declare the glory of God! No, that's not it in the picture, just the moon. But Mars was there alongside it.

Arielle wrote a paragraph for school on "The Best Part of Christmas." She said the most fun activity was rolling out, cutting, and decorating our sugar cookies. But she said the very best thing was having all her brothers and sisters together. She didn't even mention gifts.
We had plenty of joy this year, but also sorrow. I called my sister Christmas night and found out out she is very ill and possibly won't be on this earth very long. She was my very best friend when I was a child and often my only friend because we moved so often. I can't imagine my childhood without her. I would have been desperately lonely. She endured my bossing her around and she is one of the gentlest, kindest people I have ever known. My sister and I created our own world of fantasy to escape the real world and we played endlessly, caught up in the stories we invented for our dolls and toy animals. She told me the other night that one of her best memories was washing all our doll clothes outside in the yard and hanging them up on string with tiny, plastic clothespins. I remember that same yard and her climbing to the top of the eucalyptus tree. We talked about our summers at Grandma's house in California and the joy and peace we found there.
.
When I think back, I have strange, disjointed images, like waking her up in the middle of the night to tell her I saw a werewolf standing under the red hall light or that I was sure rattlesnakes were under our beds. I must have scared her half to death. We took swimming lessons together and walked to church together in the quiet little mining town in Arizona. I think of hours and hours of Monopoly with her and my brothers as they got old enough to play. I remember standing with her at our remote bus stop in knee-deep snow after we moved to Missouri. Despite the bitter cold, the school forbid the wearing of pants and we were required to wear dresses. My rebellious mother had us put pants on under our dresses.
.
To my great regret my sister and I parted ways as we grew to be teenagers and then adults. We lived in different states and now we can't make up those lost years. For her own reasons, she has withdrawn from the family and the rest of us have let her go. It's too late now and she doesn't want to see any of the family again.
Christmas night, before I called my sister, two of my boys had exchanged harsh words with each other. I hung up the phone and my first thought was to shake them up and tell them time is too short! We cannot fight and drive wedges between each other and go our separate ways. Only God knows the number of our days.
The Sunday after Christmas our music director's words hit me directly. He said, "Unilaterally, Christ initiated reconciliation with us." Unilaterally. Jesus didn't wait for us to make the first move. "While we were yet sinners, Christ died for us." Romans 5:8. "We implore you on Christ's behalf: be reconciled to God." II Corinthians 5:20. Having done that, Jesus commands us, "...go and be reconciled to your brother." Matthew 5:24.
.
Don't let another day go by.
Posted by Deb at 7:33 PM 2 comments: