I've been discouraged lately. Suffering surrounds us. Is this what happens at my age? Fred and I have each lost a sister and my best friend from junior high lost her brother recently. Several friends have cancer and another friend's child is breaking her heart. Our parents are getting old and may not be long in this world. How do we survive this stage of life with all its sadness? How do we get past the fear of what may happen next? How do we minister to those suffering around us?


We live in a corrupt, broken world. Some people do evil things. Our beautiful creation is polluted and toxic. It's no wonder we get sick. It is easy to slide into hopeless despair, and then bitterness, complaining, and defeat.


But this is not the way the world was meant to be. No wonder we never quite feel at home in it. All creation is groaning and waiting in expectation for a world to come.


"We are afflicted in every way, but not crushed; perplexed, but not driven to despair, persecuted, but not forsaken; struck down, but not destroyed; always carrying in the body the death of Jesus, so that the life of Jesus may also be manifested in our bodies...


I always get stuck on the phrase "light momentary affliction." I think, what my friends are suffering is not light and momentary! What did Paul suffer anyway? He endured imprisonment, beatings, stoning, and shipwreck. His life was constantly threatened. That doesn't sound light and momentary either. But then we realize the passage says "beyond all comparison." COMPARED to what lies ahead, these trials are light and momentary. "For we do not have a lasting city, but we are seeking the city to come." (Hebrews 13:14) Our lives on this earth are so short compared to eternity, the place where God wipes away every tear, and there will no longer be any death, mourning, crying or pain.


C.S. Lewis ends his Chronicles of Narnia with these words:


“But for them it was only the beginning of the real story. All their life in this world and all their adventures in Narnia had only been the cover and the title page: now at last they were beginning Chapter One of the Great Story, which no one on earth has read: which goes on forever: in which every chapter is better than the one before.”
Posted by Deb at 9:00 PM No comments:

Grieving for my friends traveling treacherous roads, I was thinking of this story by Corrie ten Boom. Then I remembered I've already written about it here on this blog. But Corrie's words are worth reading again.

I have been reading Amusing Ourselves to Death: Public Discourse in the Age of Show Business by Neil Postman. It is a very interesting (and alarming) commentary on our culture and its love affair with television. The book was written in 1985 but is even more pertinent today. Did you read Orwell and Huxley mentioned below in the foreward of Postman's book? I read them in high school, when I didn't care about anything except my own little world. Now, the older I get, I am so frustrated by the shallow, empty, mindless pursuits of the people of this country.

"We were keeping our eye on 1984. When the year came and the prophecy didn't, thoughtful Americans sang softly in praise of themselves. The roots of liberal democracy had held. Wherever else the terror had happened, we, at least, had not been visited by Orwellian nightmares.

But we had forgotten that alongside Orwell's dark vision, there was another - slightly older, slightly less well known, equally chilling: Aldous Huxley's Brave New World. Contrary to common belief even among the educated, Huxley and Orwell did not prophesy the same thing. Orwell warns that we will be overcome by an externally imposed oppression. But in Huxley's vision, no Big Brother is required to deprive people of their autonomy, maturity and history. As he saw it, people will come to love their oppression, to adore the technologies that undo their capacities to think.

This book is about the possibility that Huxley, not Orwell, was right."
Posted by Deb at 7:05 AM No comments: 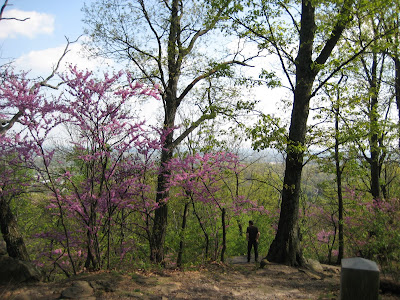 My favorite Psalm set to music. http://www.youtube.com/watch?v=YvhWTWpNWL0
Posted by Deb at 6:01 AM No comments: 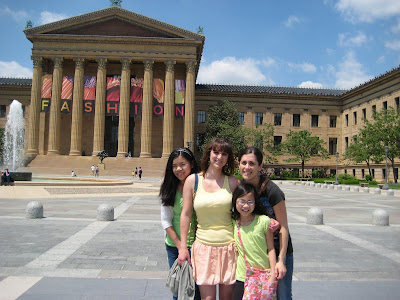 Through the generosity of my friend, we had an opportunity to visit the art museum in the big city at no cost. We wanted to see the Roberto Capuzzi exhibit that all the teachers at 4-H were talking about, but the price for three of us to go would have been prohibitive.

Roberto Capucci is an Italian fashion designer and artist. The dresses he creates are so amazing that many of them are considered sculptures. Since Arielle and Liana sew, I knew they would appreciate the intricate designs and elegant fabrics and brilliant colors of this exhibit. Capucci was inspired by elements in nature, which was especially fascinating to us. Some of his dresses resemble flowers or butterflies. Some incorporate bamboo, stones, leaves or straw. Truly incredible! The 4-H teachers were planning an adult "field trip" to the museum. I would never have gone without my daughters! I wanted to share this experience with them.

I have never driven to the museum myself and the traffic makes me crazy. I didn't think Fred would appreciate the exhibit. So who in our family is artsy and creative and might like to go too? Gretchen, my future daughter-in-law, and Marissa, my step-daughter! So the five of us headed off on a beautiful spring morning down the highway infamous for traffic jams and delays. But none for us today.

After the exhibit we wandered around the museum, but not long enough! The night before we had gone on-line to check out famous paintings we wanted to see. So we found a few, but then it was time to go home. Again, concerns about traffic.

Thank you, my friend, for giving us this special time. My girls' lives are richer for it. I saw the wheels turning in Liana's head as she viewed the incredible dresses. Later, she spent all of Saturday creating her own design, unique to her, but I could see traces of Capucci in it. When she is finished sewing it, I will post a picture.
Posted by Deb at 6:50 AM 2 comments: 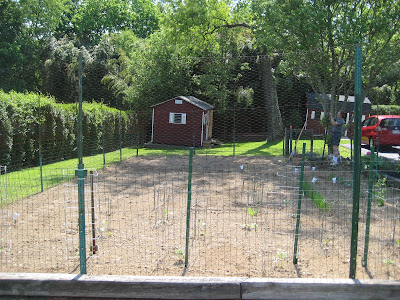 Mother's Day was one of those perfect kind of days. Sunny and warm and bright with fluffy flowers on the trees and blazing azaleas adorning homes. Church was crowded and I couldn't sit with my son and daughter-in-law, but my precious granddaughter squeezed in beside me.


At home, we needed to plant the garden. Fred had already put in some potted vegetables and said he would do the seeds so I could work on the wedding dresses. I knew I had to help him. It is backbreaking work. The sewing would just have to wait for another day. The girls ran out to make chalk drawings in the driveway. I got on my ragged gloves and old sneakers and headed out. I would have missed a blessing if I'd stayed inside.

Fred and I worked side-by-side and planted everything. Fred works so hard on the garden all season. It has really become his "baby" and not mine anymore. So I follow his lead and do things his way, even though my years of gardening experience vastly outnumber his!

We planted two packs of green beans. Be ready to receive the bounty, friends and family! I'm already envisioning the sweaty, painful work of harvesting them. Maybe I'll invite you over to pick your own!
Damien and Gretchen and Marissa came over. The deck is being renovated due to carpenter ant invasion, so we sat in chairs in the middle of the yard and watched the girls play badminton. Fred cooked out some burgers. We called the sliders because all we had were hot dog rolls. We cut them in half and made these tiny meat patties to fit on them. The children who couldn't come over called, so I was able to connect with each one. Later, Marissa, Arielle and I sat in the kitchen eating goodies and talking like three old women. I really am becoming my mother. That is her favorite activity too.
It was a blessed day.
Posted by Deb at 6:54 AM No comments:

In Sickness and in Health

My son is getting married this summer and we are in the midst of wedding excitement. The girls are to be junior bridesmaids, so their dresses have to be made, and they are constantly discussing shoes and jewelry and hair. And that is nothing compared to the anticipation and preparations of the bride and her mom! What a beautiful picture of marriage when the day culminates in the vows and exchange of rings and a new couple is announced to the world.


My good friend is seriously ill. She has been married many years--probably 30 something. When I visited her a few days ago, her biggest concern was not for herself but for her beloved husband. She was worried he is doing too much and not taking care of himself. She spoke of his total devotion to her in her time of need, his vigilance in never leaving her side. The endless, sleepless nights they shared, his attending to her every need. She said, "In sickness and in health..." Yet, his gift was overwhelming and amazing to her. What an honorable man! What an even more beautiful picture of marriage.


I found out a woman in our church will have surgery this week--a kidney transplant. The donor is her husband. What a sacrifice. He is risking his own health to give life to his wife. "Husbands, love your wives, just as Christ also loved the church, and gave himself up for her." (Ephesians 5:25) This is the mystery of marriage.


My son and his new wife will have a joyous wedding day in July, and they will share many other celebrations in their married life. Unfortunately, they may share pain too, and they will be called to sacrifice for each other. It is not to be grieved though. It is a high calling. Jesus said there is no greater love than to lay down your life for another.
Posted by Deb at 6:55 AM No comments: