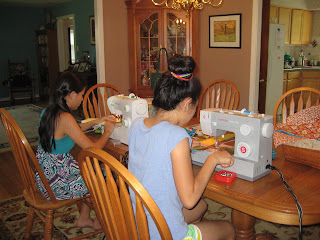 This has been the summer of bags.  The girls and I have talked about starting an etsy store, and my business-minded son said first of all we need inventory.  So we created inventory!  We worked on these projects all summer, along with the girls' 4-H sewing projects.  I also had some new sewing students, so really, this has been the summer of beautiful fabrics and the whir of machines.

We started school today...so sad...we'd rather be sewing.  But we combined sewing and school by making school bags!  In our last week of summer, the girls made the bags they will use to carry books back and forth.  Family and friends, did you know we are actually going to leave the house to go to school?  Well, one day a week anyway.  The girls will be attending a co-op and I will be teaching there.  We needed school bags.

So what do you think?  These first four are ours, but we can make others if you know someone who would like to buy a custom-designed bag!  They are large, well-made tote bags.  Arielle and I also made smaller bags, with the same quality fabrics and sturdy linings like the tote bags.  Those are all for sale.  Tell your friends!  Sorry for the poor photography.  My daughter-in-law Gretchen was going to take professional pictures, but she is preoccupied with getting ready to give birth to my next grandchild! 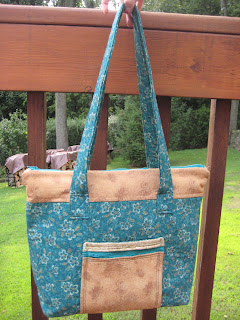 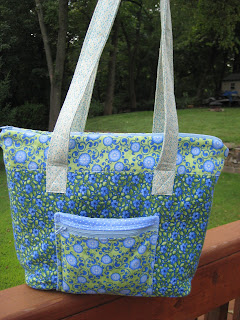 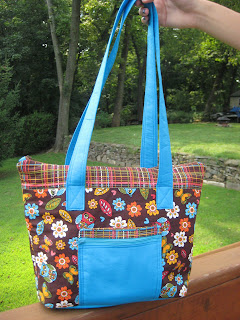 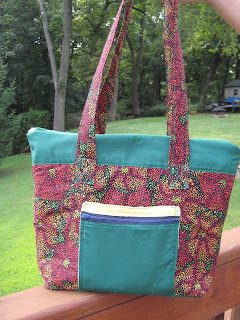 Bags below are for sale 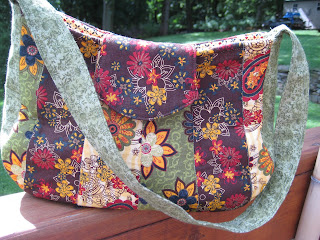 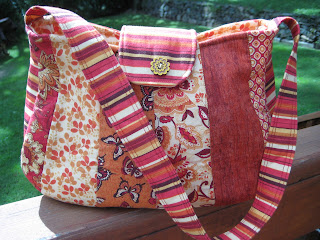 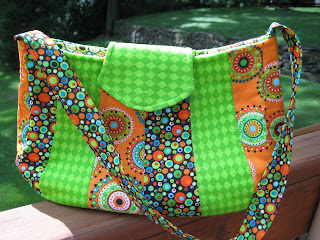 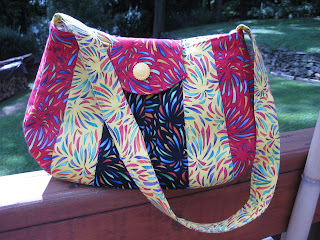 Ready for the Snow

Fred says I'm most happy when a pot of soup is simmering on the stove.  Maybe that's true.  Soup making is the only cooking I enjoy.  Fred is getting ready for winter in his own way, while today I made Tommy's Soup.  We had enough for dinner on a humid, summer night, and also enough to stock the freezer. 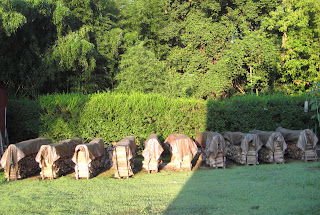 This soup can only be made when our garden tomatoes are producing an abundant crop because ripe tomatoes are the key ingredient.  Store-bought tomatoes would never work.  We need many other vegetables too, and I add whatever is available from the garden.  This year we have okra!  The original recipe calls for okra but we've never had it before.  After tasting this year's soup, I realize it is a must. Okra enhances flavor and texture both.

So Arielle shucked the corn we bought earlier from a nearby farm.  She sat outside in the yard, carefully removing all the silk while the Rose of Sharon bloomed and the insects made riotous sounds.  Liana in a sundress and bare feet snapped the green beans, freshly picked, and I tramped through the muddy garden to choose the red and green peppers and one perfect jalapeno, not too hot. 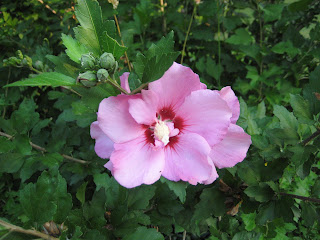 One by one we dropped the vegetables into the pot:  tomatoes, onions, peppers, corn, green beans, carrots, and okra.  Each one added to the wonderful fragrance in the kitchen as it cooked.

At the first snowfall, when the garden is barren and the insects silent, when we are bundled in fleece and Fred fires up the woodstove, I will take the soup from the freezer.  We will remember and celebrate the summer's bounty.  We will be thankful, because food is a gift.  This food, this soup nourishes body and soul.  "He did good by giving you rains from heaven and fruitful seasons, satisfying your hearts with food and gladness."  Acts 14:17

Tommy, an unknown (to me) Cherokee in North Carolina, would probably be amazed to find out his soup recipe has become part of our family's traditions.  My mother passed the recipe on to me.  She knows all about soup and tradition.

Before the storm came I gathered tomatoes.  The plants are towering now and I have to be careful not to trip over the low hanging vines.  I need to crawl under and work hard to reach  those red globes and I gather them in my shirt, too many to carry.  In the afternoon I brought them in and removed the skins, then chopped them and simmered them down to put in the freezer for winter soups.  I do this every summer.


This summer I am thinking of Arielle.  It was her special day--August 4th--and I remember right before we left for China fourteen years ago my mother and I were hurriedly gathering tomatoes and cooking them down for the freezer, knowing I would be gone for two weeks and even when I returned, would I be concerned about tomatoes?  Fred had just had surgery.  He couldn't do these things.  So instead of packing, my mom and I were picking tomatoes and I was longing for the first glimpse of my daughter's face.


Arielle was at camp this past week.  We did not hear from her at all, and I did not call her.  (I did send e-mails and a couple of letters.)  I knew that someone would call me, if needed, but this was her week away.  She is training to be a counselor, working under an adult, with a cabin full of preteen girls.  Not my cup of tea!  But Arielle loves this sort of thing.  She is responsible and loving, compassionate and patient, perfect for the role.


It was a long, long week.  I missed her so much.  We had Lana here a couple of days and we had some sewing students come over, and Liana and I had a great sewing day making tote bags for the new school we'll all be attending in September.  But I am uneasy without Arielle.  I long to see her face.


On Saturday, Arielle special day, Liana and I drive to church at the appointed time for picking up the returning campers.  I see Arielle from the road among the crowd of children.  She sees us too.  She is glowing bronze from the sun, a shining star among all the others, that big smile on her beautiful face.  My daughter!  Then she is in my arms for a big hug.  I remember a hug long ago, when I first saw her face.  She lay her baby head on my shoulder and she was forever mine.


Arielle bubbles over telling me about her week. She has had a great time.  Then a child runs up to tell me, "Arielle is the BEST counselor I EVER had!"  I share my daughter with the world and she brings joy to others.


My daughter is home.  I am content. More tomatoes to pick today.
Posted by Deb at 7:39 AM 1 comment: 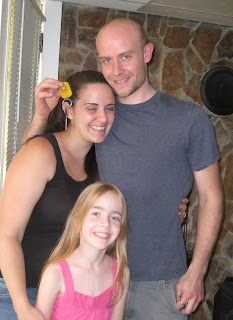 This has been a week of family time.  My heart is full.  But some anxiety pulls at me because two of my children are gone, Arielle away at summer camp and Dominic away in Kenya.  I will be glad when everyone is back home.

Jon and Chrissy moved this week!  Finally, after months and months of waiting, they closed on their first new home!  Liana and I got to spend time with Lana while they packed and cleaned and loaded the truck.  With Arielle gone, it was the perfect time for Liana to be in the big sister role.

Kelsey and Seth are going home to Minnesota in a few days so Damien had a cook-out at his house, on a weekday, and invited all the family to come.  I know it was a sacrifice on his part after working all day, but he and Gretchen are generous.  I realized ALL my grandchildren were there together, except for the new tiny one not yet born.  (Wish you had been here, Stacia!)  So we corralled the kids together (except for Gretchen with the bigger tiny one not yet born) and tried to get a picture.  Do you know how hard that was?  Do you know how many pictures I took, yet this poor quality one is the best of the bunch?  Still, I treasure it.  Deacon and Joey discovered each other for the first time while we were trying to arrange the kids and it was fun to see them interacting.

In the kitchen Gretchen invited me to touch her near-to-bursting belly.  What an honor!  I used to hate how people would reach out without asking and touch me when I was pregnant.  But Gretchen allowed me to do this.  My grandchild right beneath her skin, alive and moving!  So close!  How I love that baby already!

Fred has discovered his own way of bonding with his grandson.  He takes little Joey and walks him around outside--for hours it seems!  Both seem to love it.  I just can't carry that heavy boy for long.  We all chased after Deacon to keep him from the street and Liana played with all the little blonde girls. We're all so different, yet we're FAMILY!  I didn't get enough time to talk with Kelsey and Seth.  What do you say before a year's separation?  They said they have had a good summer and wished they could stay longer.

As Fred, Liana and I got ready to leave, Kelsey had just sat down to her dessert.  I went over and hugged her. She stood up, my precious 17-year-old granddaughter, my first, and left her dessert to say good-bye. It was a respectful gesture.  I was filled with regret for lost opportunities and words unspoken.  I just told her how much I loved her.  My towering grandson Seth hugged me hard.  Seth gives the best hugs.  He's noted for that.

On the drive home I think about how blessed I am.  Like so many others, I belong to that group called GRANDMOTHERS.  What a title!  What an honor. 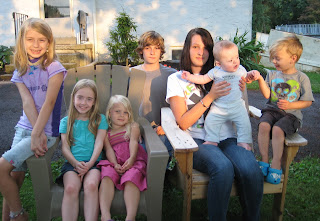