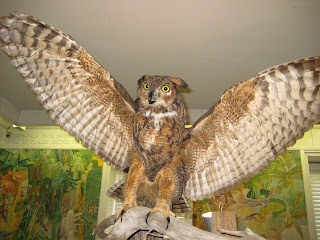 I woke the other night to an eerie sound that seemed to be right outside our bedroom window. It was the unmistakable hooting of an owl. No wonder there are so many myths and superstitions surrrounding owls. Their sounds are haunting.

We have a bamboo grove in our back yard and we have been plagued with thousands (no exaggeration) of birds that roost there every night. Our cars are splattered every evening as the birds fly back from wherever they go every morning. Fred has tried throwing rocks at them to discourage them from thinking our bamboo is a good nesting place. If that seems cruel, I have to clarify that the bird droppings are not just a nuisance but a health hazard. Our bamboo leaves are white, not green, anymore. Our windows and our deck are covered in filth. It has been a very bad situation.

Lately we've noticed huge piles of feathers near the bamboo. If our cat was still outdoors, we would think for sure that it was him hunting these birds. But he is crippled now and lives inside so the feathers have been a mystery. Until now.

I searched the internet first of all to try to figure out what kind of owl we have been hearing. One site has owl-calls and I confirmed we have a great horned owl. Then I read about their diet--they eat the usual--mice--but also rabbits and other small mammals, lizards, snakes, and even other birds! Chickens, ducks, and your common ordinary birds, like the ones that roost in bamboo. I think those bamboo birds are a little unhappy with the owl. We haven't seen them in a week or so.

Arielle heard all this and once when we got home after dark she refused to get out of the car. She was afraid the owl could swoop down and get her. We had to unlock the house and have the door open before she would run quickly inside. Our poor old cat would surely be prey, so it's good he isn't available as a food source anymore.

We went to the Audubon Bird Sanctuary at Mill Grove recently for their annual sugar mapling. Trees are tapped and sap is boiled in big black cauldrons. Fred has actually tapped our trees this year and he was giving some advice to one of the volunteers. It was freezing outside so we went into the museum to warm up. A display had been set up for the kids--a model of a red-tailed hawk and a great horned owl along with paper and colored pencils so they kids could try their hand at drawing like John James Audubon. Liana took the challenge and spent a good amount of time drawing "our" owl. Arielle looked at it reluctantly. "I don't like it," she said finally. Why not, I asked, it's just a beautiful creature God made. "I don't like the claws," she responded. (See picture above.) It is a source of nightmares for her.

Last night my granddaughter Lana spent the night. With the time change, she had a terrible time getting to sleep. Finally she drifted off. A few minutes later she woke up and I heard her calling to me. "Grandma, what's that hoo-hoo-hoo sound?" I assured her it was our friendly, nice, pretty owl coming to visit. "I don't like owls," she said. I elaborated on what a special privilege it was for her to hear our sweet, peace-loving owl. At midnight a four-year old doesn't need the whole truth about owls.

Flags of the nations 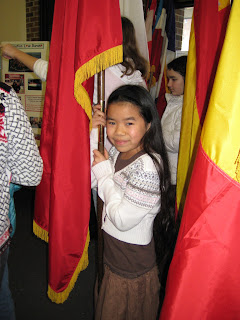 For one week every year our church has a missons week where we focus on the world outside our own community. Missionaries come back to visit and speak to different groups within the church. There is a three-night event for the kids with crafts and games and immersion into another culture. This year the girls learned about the food, language and customs of Brazil and even came home speaking some Portugese. Every year there is also a fundraiser for one of our missionary families. This time our church donated a total of $50,000 to supply a medical clinic in the Congo where we have two doctors working with a very few supplies and medicine.

The kick-off for this special week is on Sunday morning when we have a "parade of nations." Dozens of adults and children march into the sanctuary carrying huge flags accompanied by the song "Lift High the Cross." Arielle especially has always enjoyed this and from the time she was little she wanted to carry the China flag. This year, to her joy, she was selected to be a flag-bearer.

Arielle did not want to wear her beautiful red Chinese dress (although others often wear native costumes). She tried on several outfits before choosing one that was acceptable. She was very excited Sunday morning. When we arrived at church the flag-bearers gathered in back ready to make their grand entrance. That's where I snapped a picture. The music began and each carried his or her flag to the front and turned to face the congregation. By strategic planning we were nearly directly in front of Arielle. The red flag of China held proudly, she smiled that beautiful smile and her eyes glowed. Her dream has been fulfilled! Maybe someday she will lift high the cross and carry the gospel to her ancestors on the other side of the world.
Posted by Deb at 4:04 PM No comments: