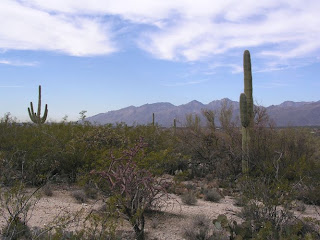 I read a story about people with dying brains. Painters can paint spectacular pictures and writers can write with unusual clarity. Not that my brain is necessarily dying, but my memories are becoming sharper the older I get. They haunt me in the dark, sleepless hours as I try to make sense of them.
.
My dad said, "I bet you can't touch that mountain." Of course I could. The massive rock jutted up vertically from the flat desert floor. I ran fast toward it, arms outstretched to touch its stone face warmed by the hot sun. But it seemed I was running in place. The mountain loomed huge in front of me, yet it stayed just inches away, taunting me. I ran faster and faster and then looked back at my dad, tiny now so far away. But the mountain got no closer. I didn't understand, and my dad was laughing at me.
.
It must have been a trick of light and landscape I still don't understand, but some mountains in southern Arizona do look close enough to touch. Still, they are so far away a child by herself could never run to reach them. I often think of that incident. Images of my childhood surface at unexpected times. The wildness of the desert was always frightening to me. Cactus threatened every step. Rattlesnakes lurked under every rock. The scorching sun itself could kill you. Once my dad left me alone in a sandy gully while he tracked some javelinas. I heard the furtive scurrying of the creatures that surrounded me and I waited fearfully for his return. Was the desert really so scary and uncertain, or was it life itself?
.
I think I remember trying to run to the mountain because I had been tricked. Over a lifetime my dad showed me I would never touch the mountain--not any mountain. He made me know I was a foolish, useless child. My dad has been gone for 20 years now. I've forgiven him, I think. But how do you really know when memories come unbidden and startling, as you re-live events from the long ago?
.
Healing has come in slow measures because of another Father who has never left me alone. Because of Him, I've touched many mountains, even His holy mountain. "...forgetting what lies behind and reaching forward to what lies ahead, I press on..." (Philippians 3:13, 14.) Maybe forgetting once and for all means wrestling with the memories and finding purpose in the past.
Posted by Deb at 8:37 AM

20 years, has it been that long?? I too am cast back in time every now and then. Maybe I was oblivious to what was going on around me but I dont recall experiencing anything truly tramatic. As a yound child this must have been horrific. Thank you for allowing me a window into your memory.

I am reminded of a quote by Anne Sexton ... "It doesn't matter who my father was; it matters who I remember he was."