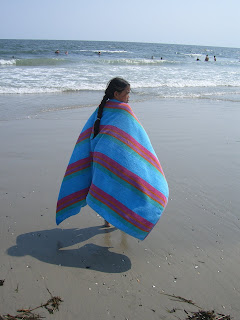 The girls and I have been studying Japan and we found a great book of haiku poetry, Cool Melons--Turn to Frogs! The Life and Poems of Issa by Matthew Gollub. Issa was a revered haiku master who was born in Japan, and in his lifetime wrote more than 2,500 poems between 1763 and 1827. We thoroughly enjoyed this beautiful book illustrated with watercolor paintings. We were inspired to try our own hand at writing haiku. Haiku is said to be a quick line sketch describing a single moment in nature. It should call to mind life's passing details. Almost all traditional haiku suggests a season. In Japanese, a haiku must contain exactly 17 syllables in 3 different lines. The first line has 5 syllables, the second 7, and the last 5 again. (For some reason this blog site will not let me put the lines under each other, so I wrote them in one long line.)

I captured this moment above with a picture, but here are the words to go with it.

Liana was very excited about the idea of writing a poem when I said I would publish it on this blog. She had a hard time keeping up with her brain as she breathlessly told me her thoughts. Her first was called "Wonder."

Liana then asked to go on-line so she could see pictures of rice paddies. She wrote this, called "China."

We had a little talk this morning about the tragedy 6 years ago. Liana was then inspired to write this, called "9/11."

Cold rain is pouring...The sky is black and crying...Oh so sad that day.

Arielle had a little more difficult time coming up with a topic, but then decided to write about two different thoughts of summer. The first is "Early Summer" and then, "Late Summer."

Give it a shot and write one of your own in this ancient literary form! Of course, send it to me to read!

Does scripture say anything about poetry? Ephesian 2:10 says, "We are God's work of art..." The word used for "work of art" is the Greek word poiema. And that's where we get the English word poem. God is creating sacred poems out of flawed humans like you and me!

I never good at this when I was young, but here goes...

June, The girls and I love it! What a beautiful poem! Liana said, "Print it, print it!" Thank you so much!