Christmas on the Radio 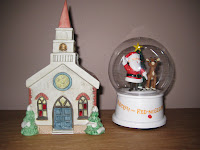 Many years ago when I was a single mom with little ones living in St. Louis, I rented a small apartment. Our complex of only about a dozen one-story units arranged in a horseshoe shape allowed us to become somewhat close to our neighbors, whether we wanted to or not. An elderly couple lived a few doors down and on summer evenings their front door would be open and you could get a glimpse of them sitting in their recliners. And you couldn't miss hearing them. One or both of them must have been hearing impaired because the TV or radio blasted out noise all evening long. It was so loud I could hear every word and every song of The Lawrence Welk Show that they seemed to love. This couple was a mystery to me, so far removed from my life. I couldn't imagine getting old and staying home listening to the radio or TV all night.
Tonight I thought about that couple. Fred is working so hard at his three jobs that he is exhausted by early evening. Usually he collapses and falls asleep before we even begin to get ready for bed. I come in and turn off the lights and the blaring TV. But this night he is still awake and it's not the TV that's on. He's brought an old radio into the bedroom and he is listening to Christmas music. The girls and I join him, talking about the old songs, singing along. Every year Fred listens to this particular station in the car because right around Thanksgiving it plays a 24 hour Christmas music marathon. We know all the words to these songs. Sometimes I wish we could hear a few new ones.
Tonight we listen to Andy Williams, a young Michael Jackson, Jimmy Durante, Karen Carpenter, John Lennon, Frank Sinatra...Neil Diamond--finally someone who is still alive! We laugh about that. Fred is covered up to his neck in big blankets. He's cold. He's tired. He says, "I'm getting to be an old man."
Fred loves Christmas. Earlier in the day he put up the lights outside and set up our lighted angel in front of the house. He stopped at a hardware store and bought a battery operated snow globe that blows the "snow" around while Burl Ives sings songs from the old cartoon, "Rudolph the Red-Nosed Reindeer."
The mystery of aging is solved. It's us! Just slower and more tired. It's knowing what's important in life, sitting with your spouse listening to Lawrence Welk on summer nights or laughing with your family and singing old Christmas songs. It's being satisfied with small joys.
As I wrote earlier, we want to celebrate the holidays in a God-honoring way. Do we totally reject the secular trappings and devote ourselves solely to the sacred? I think about that tonight. Yes, we are very aware that Christmas is the day God sent the greatest gift to mankind, the gift of his Son who would be the Savior of the world. But Christmas is also a family tradition, one we have kept since childhood. It is a time for reminiscing about the years that came before. I am thinking of small boys in pjs watching the Rudolf the Red-Nosed Reindeer cartoon on TV. This was before you could buy the video and watch it whenever you wanted. You had to wait for it to come at Christmas! I think of the only time my mother ever sang. We kids were sitting on the couch with her in our little house in Arizona and she was teaching us the old carols. She sang "God Rest Ye Merry Gentlemen" and I've loved that song ever since. I think of my little girls lying on the floor beside the lit-up Christmas tree that is towering above them, watching Daddy's electric trains go around and around, lost in their imagination.
A new song comes on that I've never heard before. It's the Trans-Siberian Orchestra playing "Christmas Canon Rock." Liana catches my eye. She recognizes one of her favorite pieces of music, Pachelbel's Canon in D. This is a jazzed-up version on an electric guitar, but we are still mesmerized and silent as we listen. It's magical.
God is honored when we think back and smile on the rich, full life he has given us and when we gather our loved ones around us making new memories that they will someday treasure.
Posted by Deb at 7:26 AM