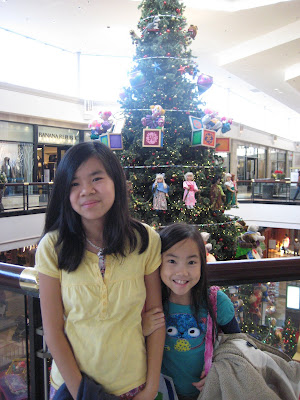 Well, here we go again! I have a teenager in the house once more. Somehow I think this time around will be different. Girls and boys are SO DIFFERENT! I've discovered that fact over the years. And my daughter is a unique person, wise and responsible. I will not buy into our culture's view that the teenage years will be tumultuous and difficult.
Arielle is 13! She decided she is too old for our usual kind of party with friends coming for crafts and games. With all that has been going on here, I wasn't up for it anyway. Financially we can't do the birthday event parties where the group goes to an ice skating rink or a pottery-making studio. But I told Arielle I would give her a day off from school and we could go or do anything--just the three of us girls.
Arielle had a hard time choosing. But she decided she wanted to shop 'til we dropped. So we did. We went to the mall and I bought her some needed clothing. We had smoothies from the food court and then walked around sampling all the food the vendors were handing out. We found Santa, just to see if it is the same "real" Santa who has always been at this mall every year since Arielle was a baby. He's getting old. With some trepidation we walked over and discussed how sad it would be if he wasn't there. But he was!
We bought Fred a birthday gift and Kelsey a Christmas gift. Liana bought an outfit for her new Build-A-Bear. We walked over to the next-door mall we never visit and found a great family gift for my nieces. I won't say what it is here, just in case my brother is reading. The best part of this trip was having no schedule, just doing whatever the girls wanted. Finally even Arielle had had enough and we went home. I made her favorite birthday soup. Then her cousin Julie called and that really made her night special.
Arielle wanted a new guitar for her birthday. She doesn't have a teacher, but we got her an instructional DVD. She also has a brother who plays guitar, so she looks forward to him showing her some techniques. Amazingly, she has already learned how to tune the guitar and how to play some simple chords. Her years of piano study have helped in reading the music and understanding the terms. My little girl has grown up! How blessed I am that she is my daughter! 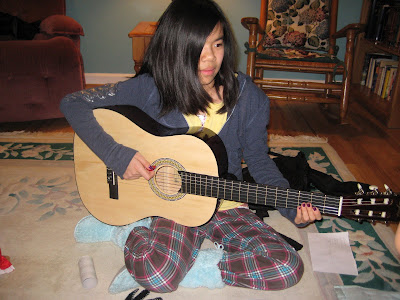 we were at the mall for almost five hours!