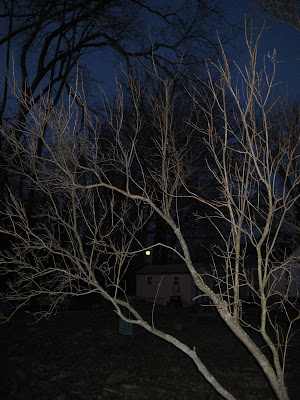 Fred's new job has totally changed our household schedule. We get up very early. For the most part I relish the solitude and total quiet of the early morning. It is worth losing a little sleep to have this time. Recently, I was delighted to look out my windows and see beauty I would have missed if I was asleep. In the western sky at dawn, the moon was setting. My photos are not the best, but you can see the little glowing light above my neighbor's shed. On another morning, I opened the drapes downstairs and was struck by a rising sun setting the sky on fire out the eastern window. It was absolutely spectacular, but I just couldn't capture it well on camera. We have snow on the ground, but I put on my boots and bundled up and ran out to get a picture. Then as the sun rose higher, the sky was even more beautiful and larger in scope. I considered gearing up again to go outside for another shot, but figured it wouldn't turn out. Some things are best just enjoyed rather than captured on film.
.
January is half over. We are back in the full swing of things and that makes time fly. Liana has to take the California Achievement Test on Friday, so our school days have been full as I try to prepare her. Public school kids are required to take so many more tests and I'm sure they are better test-takers just because they get more practice. Liana knows her stuff but she is not accustomed to being timed or working in a large classroom with other children.
.
Every weekend from now until June will be filled with sewing at 4-H. It's been a nice break (for me) but the girls are anxious and motivated to sew again. Alpha is starting again tomorrow night and once again Fred and I are cooking for another session. I let it be known this is my last time. A lesson I learned (or rather didn't learn) a long time ago is that you are given the time you need to do what God has called you to do. If you "don't have time" then you are probably doing things God did not call you to do. So I need to make some cuts.
.
Today is a holiday, but my poor girls are hitting the books. I was criticized by a postal worker last year for making my children do school work on MLK Day. She would probably really be offended if she knew I let them have a day off from school on their own birthdays. Please don't misinterpret. We respect Dr. King and have studied his legacy. But I will set my own school schedule with my own children. 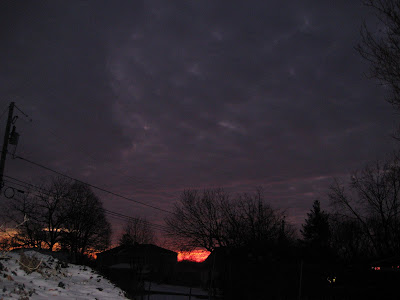