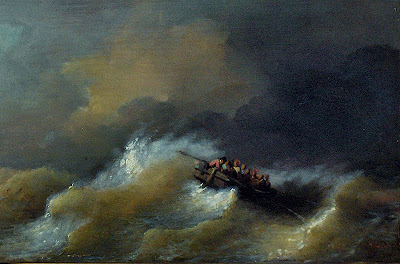 "Immediately Jesus made his disciples get into the boat and go before him to the other side of the sea while he dismissed the crowds. And after dismissing the crowds, he went up on the mountain by himself to pray. When evening came, he was there alone, but the boat by this time was a long way from the land, beaten by the waves, for the wind was against them. And in the fourth watch of the night he came to them, walking on the sea. But when the disciples saw him walking on the sea, they were terrified, and said, 'It's a ghost!' And they cried out in fear. But immediately Jesus spoke to them, saying 'Take heart; it is I. Do not be afraid.'" Matthew 14:22-27.

What I find interesting about this passage is that Jesus "made" them get into the boat, to go on ahead of him. The disciples found themselves in a tempest on the sea, but not because of anything they did wrong. It was not a random accident or because of poor choices they made. They were there because Jesus told them to go there. Jesus knew there was a storm brewing and he sent his friends into the midst of it.

Can you imagine what the disciples thought? First of all, they were fishermen. They had surely seen storms before, but this one really frightened them. They knew what the outcome could be. But they also knew Jesus could calm the winds and waves. Just a few chapters back, Matthew records another bleak night on the sea. Jesus was asleep in the boat when his disciples woke him up to save them from the storm. But where was Jesus now? It was the fourth watch of the night--between 3am and 6am. These men had been struggling for many long hours.

You know Jesus is aware of the storm. He knows everything! But where is he? Why would he do this? His people desperately cry out to him. Then Jesus comes to them. But the disciples are terrified and don't recognize him--until they hear his voice. "Take heart. It is I. Do not be afraid."

When we can't see him, we must trust him. We watch for him when the thunderous waves rage against us and our boat threatens to dump us into the sea. We wait to hear his voice. Jesus is close. He promised he would never leave us to face the storm on our own.

A little verse by Charles Spurgeon sums it up:

"O angel of my God, be near, Amid the darkness hush my fear; Loud roars the wild tempestuous sea, Thy presence, Lord, shall comfort me."