On a beautiful, breezy Saturday morning Arielle and I harvested the rest of the corn. How did this summer go by so quickly? Not so long ago our homeschool co-op group of little girls were digging and dancing around in our freshly plowed garden plot. I hoed the furrow for the corn and they each took handfuls of seeds and carefully planted them. Now we pulled the dry stalks to begin preparing the garden bed for winter. It's hard to believe snow will soon be falling and another year will have passed.

A Russian Orthodox priest named Anthony Bloom practiced a discipline called "stopping time." He said we must deliberately stop time that is trying to move too fast. It is a crucial step in conquering impatience and creating space for God. Philip Yancey writes about him: "He concentrated on living in the present, recognizing the past is irremediably gone and the future is irrelevant because who knows whether it will happen or not. Now, a fleeting instant, represents the intersection of eternity with time."

How do we stop this frantic chaos of rushing through the day or the week, and then looking back with amazement at how the year flew by? I'm trying to learn to live in the "now." I think one reason I love the shore is the timelessness of staring out at the sea, with no agenda, no rushing, just quiet stillness except for the rhythmic sound of the waves. If we pay attention to the "now," we may find more moments like that, even in the everyday-ness of life.

Arielle has been in 4-H since January. She sewed a skirt and a bookbag and won some ribbons and her projects were on display at the annual 4-H County Fair. We spent three days at the fair--one day working and two days just fooling around visiting all the exhibits and meeting interesting people like the little red-haired girl who held a red-feathered chicken named Rachel. The girl somberly asked us if we would like to pet Rachel. We asked her several questions about her fancy chicken, and I saw she took this poultry-raising very seriously. Later Liana peeked into an incubator full of eggs and, incredibly at that moment, saw a chick hatch. She called out to tell me, and I never heard such wonder in her voice.

We met a teenage girl walking a goat named Fifi on a leash. Later we tried not to laugh during the goat judging as youngsters struggled with their rowdy animals to make them behave until the judges were finished. It is very fitting that young goats are called "kids." There are a lot of similarities. We paused while a parade of young boys with various fowl tucked under their arms marched by. We talked to a young woman who had a pony she rescued from a horse auction where neglected, starved animals were sold for the slaughterhouse. In another tent children lathered up their pigs with purple shampoo to prepare them for the competition. We petted the sleek, black lab puppies raised by children for a year or so until the pups went off to seeing-eye dog school. We marveled at the gorgeous quilts, snapping photos that would never do them justice. Even vegetables were proudly arrayed, although I think we've grown a bigger zucchini than the one that won first place.

The highlight of the fair for the girls was the huge fabric sale organized by the crafting club Arielle attends. We clocked many hours sorting and organizing fabric, patterns and craft items for the store. After a trip outdoors to see the animals, the girls kept returning to the fabric room. We worked so long that we racked up quite a bit of credit to "purchase" fabric and the girls spent a long time choosing what they wanted. 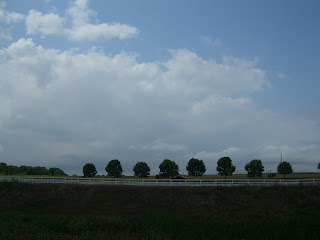 In the evening the lights in the tents came on and a live band began to play, creating a nostalgic kind of atmosphere. It reminded me of simple days on the windy plains of Oklahoma with my little boys. We noticed a man in a hay wagon giving free rides around the grounds, so we piled on just as the band began to play "Take It Easy."

"Don't let the sound of your own wheels drive you crazy, lighten up while you still can..." Not exactly spiritual wisdom, but an appropriate message for me anyway. It began to rain while we rode around, but that didn't matter. As the drops drizzled down our faces, we laughed with the others on the wagon and I looked out over dusky fields and treasured this special time with my daughters. I wasn't hoping for the ride to end or thinking what we would do next. Time stopped.

When we pause for these "now" moments, we get a glimpse of the future. I wonder about the adults these kids we met will grow to be--the kind of children who have proved they have the discipline to work hard. The rambunctious puppies will one day be dignified companions to their blind owners, the lovely quilts will adorn a home or comfort a child, the newly hatched chicks may return to the fair next year, proudly displayed by freckle-faced kids.

My girls came home and dumped their specially selected scraps of fabric on the living room carpet and excitedly chattered away about their dream for this and that bit of cloth--a fashionable purse, a glittery shawl for a doll. "Mom, will you make me a skirt from this one?" Endless possibilities. Even the corn we prepared today will sweeten a winter soup in the next few months.