The Rest of the Gettysburg Trip 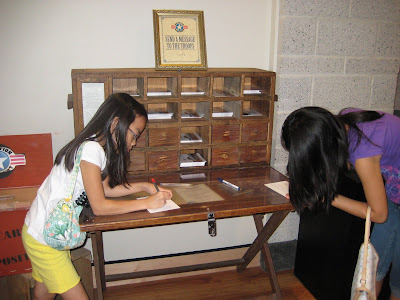 The next morning the girls and I returned to the Visitor's Center and spent a lot of time in the bookstore. My son Jon, like Liana, was drawn to the Gettysburg Address as a child. His birthday is coming up and I saw a picture book in the store that the girls and I read last year. It is called, appropriately, The Gettysburg Address and the author is Abraham Lincoln. That's all it is, but the illustrations and how the text is divided on each page makes this a beautiful book. I thought Jon would enjoy reading this to his daughter.
We don't usually spend money on souvenirs when we take a trip, but I told the girls they could each get a little something in that store. Liana chose a book of paper dolls of a family at the time of the Civil War and Arielle chose a copy of The Red Badge of Courage by Stephen Crane. We did not visit the Cyclorama or the museum again due to the cost, but for anyone traveling to Gettysburg, these are a must! As we were leaving we saw a display set up where visitors can send a postcard to our service men and women, so each of us wrote a message and mailed it. 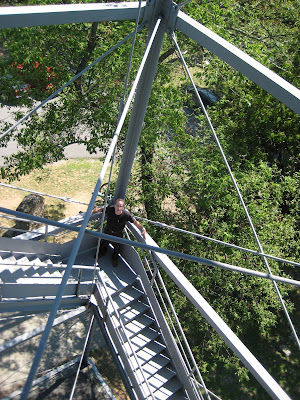 It was near lunchtime so we found a Farmer's Market nearby. August is a little early for apples, but to our delight, one farmer had his first pickings. Nothing compares to a fresh apple right from the tree! And he had my favorite, Honey Crisp! He also had fresh, ripe peaches and tomatoes. Great lunch!
Fred had some free time in the afternoon so he took us out to the battlefield. We climbed the high tower at Culp's Hill and then said the girls could return to their favorite places. Liana chose to see the Pennsylvania Monument again and Arielle wanted to go back to Devil's Den. I wanted to visit Little Round Top. We all had recently seen the movie Gettysburg, so we could picture some of the events in these areas. Now when we hear about Pickett's Charge and General Armistead leading his troops across the fields, the Highwater Mark is more meaningful. When we walked through the woods where Colonel Chamberlain ordered the bayonet charge down the hill, it is not just a history lesson but real people who walked and died on this ground. 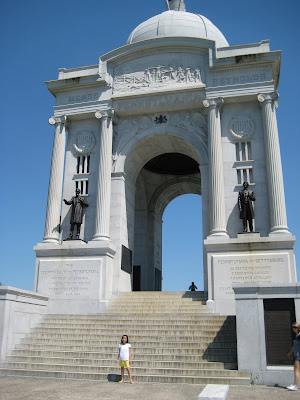 Back in the hotel, Liana busied herself cutting out her paper dolls and Arielle watched a movie on TV. They look forward to the pool later with Dad. How relaxing to be together and have no agenda or schedule. It was a wonderful vacation. 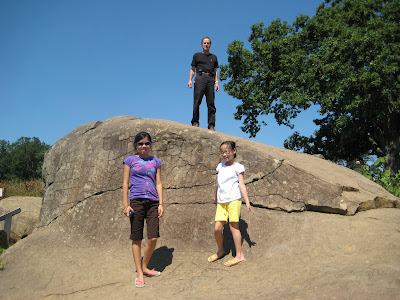