The Rest of the Weekend

Dominic and Stacia brought joy to our house! Fred and I always seem to be caught up in never-ending tasks and forget to have fun. Maybe that's one reason the girls are so thrilled to have guests come. Then their parents relax and are open to adventure.
.
We didn't do anything big or travel far. We went lamp shopping at the shop where Gretchen works. But then Dominic and Stacia turned it into fun by suggesting we stop at an ice cream shop. Then we enjoyed our treats while walking around the town.

On Saturday night I thought the younger people would want to get away and spend time with friends or the other kids. But Dominic suggested we play miniature golf. And he wanted to wait until dark. Usually Fred and I would be setting our minds on finishing chores and getting ready for bed at that time. But this night we headed off to the golf course. What fun we had! Of course, it was better in the dark, playing in the lights and shadows. None of us are very good at golf--well, maybe Fred and Stacia--but that made it even more fun as we shot balls into waterfalls and sent them rolling down hills. Liana even got a hole-in-one on the last hole and won a free game! 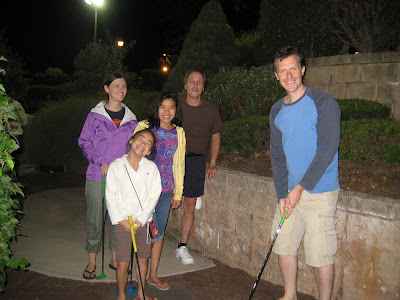 After we finished the game, someone suggested the batting cages. Dominic, Stacia and Fred got their helmets on and hit several rounds of balls. Next, there was the driving range. The guys bought a jumbo bucket of balls and we all took turns trying to send them off into the dark field. Even the girls gave it a try. Dominic said last time he did this he hit a fellow golfer and knocked him out. That wasn't too reassuring, so we decided to move our bucket to the end of the range, out of the way of others. 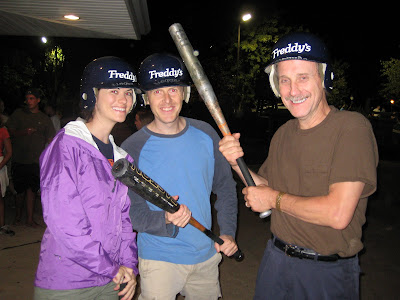 Dominic carried the bucket over and as he set it down, he spilled the balls. They started rolling down the slope as he tried to gather them. For some reason this struck me as hilarious and I laughed and laughed until I was in tears. This was so typical of Dominic! He always made life humorous and fun. My heart swelled with love for him, even as I laughed hysterically. He is a grown man, but not above reverting back to his boyish antics. He is still my little boy!

I told Stacia later it was so good for my husband who works so hard to actually get out and PLAY. Stacia said Dominic also needed to just play. We all do. Laughing and just being together. It's the best of life.

The next day we had another family cook-out. Each person in our family came, with the exception of Kelsey and Seth who are in Minnesota. All our kids are together so infrequently that it was time for a photo shoot! We cooked and ate and sat outside until the night became cool. The big kids played bocce ball and the little ones played on the swings. Dominic gave Liana and Lana horsey rides. We told stories and passed Deacon around when he got fussy. We ended the evening with Marissa toasting waffles and serving them with ice cream and homemade strawberry topping. Oh, life is good!

Summer is over, but what a last hurrah! 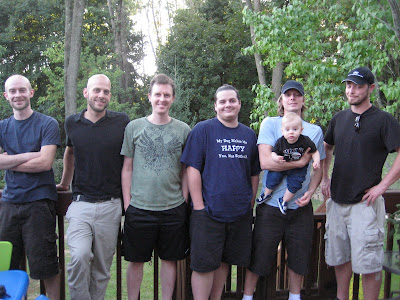 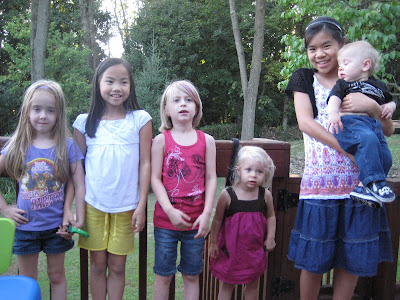 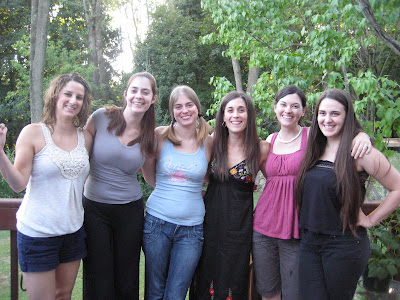 love the pics and of couurse the family!