After a wild ride down 95, we arrived safe and sound and Dominic and Stacia had a big day planned for us.  Unfortunately, the metro from their town was shut down and we had to take two cars into the city.  (No one car could contain us all.)  So we followed them.  First stop, Dominic pulled over into a park.  He said he wanted to show us one of his favorite spots.  We walked into a field in the midst of biking trails. Soon we found out why we had stopped.  Planes were coming in for a landing right over our heads!  They appeared incredibly close.  The roar and the power of those planes!  We were off to a great start on our D.C. adventure..

Dominic had a parking garage chosen for us, so we parked and then headed to the free museums.  We lost track of time as we explored the fantastic displays.  As for the girls, they loved the mammal exhibit in the National Museum of Natural History.  Liana and I were in awe of the rocks, minerals and gemstones.  I wish my brother Shane the rock collector had been here to share this treat.  There was just too much to see in this museum and we were dazzled by the sights.  At the National Museum of American History, the girls first enjoyed the dresses of the First Ladies.  They had seen replicas of these dresses in a museum in Gettysburg and they had long been waiting to see the real ones. 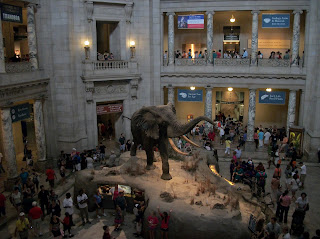 There wasn't enough time to see everything, even in just two museums.  In fact, I think you could spend hours reading and observing just one exhibit.  But it was dinner time.  We strolled down the beautiful streets to a restaurant Dominic and Stacia had chosen for us.  We looked up and saw some dark clouds hovering and made predictions on the weather.  Suddenly rain descended on us in heavy sheets!  We ran for cover under a tree with sparse, dry leaves which were not much protection.

Dominic to the rescue!  He hailed a cab and we all climbed in--except for him.  We had too many people for the cab and Dominic had to walk!  We got out at a nice Asian restaurant, went inside and waited for poor Dominic.  Finally he walked in--drenched!  He had to be cold in the air conditioning.  But Dominic is not a complainer and he directed us to some great food on the menu.  We settled in with hot Thai food, hot rice and hot tea to go with it.  Comfort food.  For me, this was the best time of the trip--being with this precious family, all of us gathered around the table with nourishing food.

We left the restaurant and the day resumed as if no rain had fallen--hot, humid and sunny outside.  I think we walked miles in the late afternoon, but it was peaceful and relaxing. We saw the White House with some interesting protesters outside.  We bought the girls ice cream from a street vendor.  We passed the majestic Eisenhower Executive Office Building that fills a city block.  The Washington Monument came into view.  On to visit the memorials. 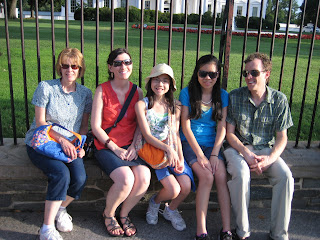 The World War II Memorial is new since Fred and I were last here.  There is a beautiful fountain in the center and we enjoyed a rest.  Dominic and Stacia hoped we would see the Lincoln Memorial after dark, all lit up.  But the timing was a little off (which turned out for the best considering what happened later).  It was fun to climb the steps with the multitude of tourists and look out across the mall to the Capitol. 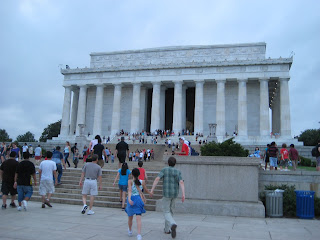 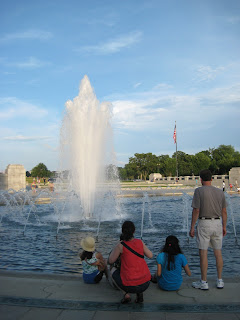 We passed by the Vietnam War Memorial and a hush seemed to come over the people as we all saw the thousands of names.  Then the Korean War Memorial.  This one was haunting for me.  I am amazed by the creator who captured in stone the fearful, wary faces of men marching through a field during the war.  It was dusk now, and these forms rose white in the impending darkness. 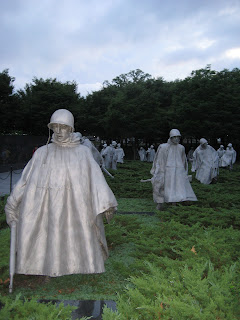 Dominic wanted us to see his office very near the Lincoln Memorial, but the guards wouldn't let us in.  Still, the building was quite impressive and it was nice to see the place where my son travels to work every day.  It was getting late and we realized everyone was too tired to walk the long way back to the parking garage.  The men decided to get a cab and go back for the cars and pick the rest of us up. (We have too many people for one cab.) Stacia, the girls, and I rested in the arms of a giant Einstein sculpture to wait.  It was very dark now and the tourists passing by had dwindled.  I was a little nervous but Stacia seemed quite comfortable in the big city. 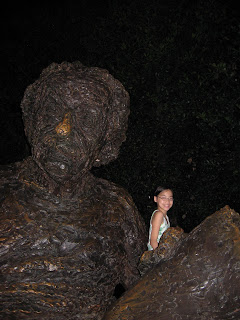 A little while later we got a call on the cell. The guys were at the parking garage, but could not get the cars.  Neither Dominic nor Fred had the parking tickets!  The tickets were with Stacia and me!  The parking attendant would in no way let them take the cars--and the garage closed in about half an hour.  We had to take a cab back to them.

Dominic and Fred had gotten a cab right away.  We were not so lucky.  But eventually Stacia found one to take us to the garage.  We arrived before the garage closed and headed back to the apartment.

The next morning Dominic prepared a fabulous breakfast for us and afterwards we went into the city again.  We returned to the American History museum and saw some of what we had missed.  There is a fascinating exhibit on the history of transportation in America and how American life changed through the years as people embraced new ways of traveling.  Liana and I got away for a little bit to see the displays of the American Presidency.  (Her choice.)  Today it was hot, hot, hot.  We walked briefly through an art museum on our way to the National Museum of the American Indian.  It was a refreshing way to cool off from the heat, but I would have loved to explore this museum.  A FREE art museum!  Amazing.  After an interesting lunch of Native American food, we realized our time in D.C. was about up.  No time to see this beautiful museum.  That was a disappointment, but next time, hopefully.

We endured another long harrowing drive on 95, this time with car trouble!  Fortunately, at one point our GPS took us on a different route and we could avoid the high speeds of the highway and we made it safely home.

The girls are full of information and images and impressions of their trip to the big city.  This is real education, the kind that is long remembered.  Most of all they will remember the love of family and the good times we shared and the stories that will be told long into the future.  We'll think about the rain and the hot food.  We'll tell about sitting in the dark with Stacia waiting for our guys to come for us, discussing how crazy it was that four responsible adults forgot parking tickets. I'll remember cooking hash browns with Dominic on Sunday morning and the thrill of seeing opals on display in the gem exhibit--glowing bright lights that gave my heart a lurch.  We'll think about eating ripe cherries on the streets as we walked to the museums, our hands all sticky.  Fred and the girls, I'm sure, have their own special moments.

Thank you, Dominic and Stacia, for a wonderful vacation!
Posted by Deb at 7:27 AM

Thank you so much for posting this, Aunt Deborah! Liana had told me that you all had gone to Washington D.C. and I was eager to hear a detailed account and see some pictures! :)

Deborah: Love to read your postings and look at your pics. Just want to say thank you for your beautiful thoughts and card which was much comfort to us. Jonathan is smiling and I am crying, especially at night when he and I were up for he was a night owl. My nights are long and hard without him. This void he has left in my heart is deep and beyong measure. However, God is always there when He sees I need comfort and on Him I rely to renew my strength as He sees fit. Ida Hansel

Ida Lee, so good to hear from you. I am sorry you are suffering so much. But how could you not, losing your precious son. We long for the day when God will wipe away every tear from our eyes and there will no longer be any death or mourning or crying or pain. I pray you can find some joy in your days.