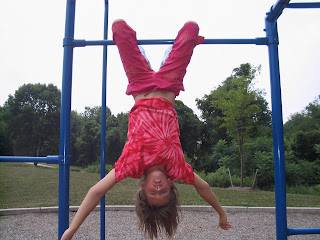 We planned a trip to the dentist (who is treating all the Russian kids for free) and a picnic in the park tonight. The girls slept late again and I had a few minutes to read Philip Yancey's book on prayer this morning. He related a story about a woman he met in a rehab center for people with leprosy in Nepal. That got me started crying again. (I will tell that story another time.) Liana came and in asked why I was so sad. I pulled her under the covers with me and held her tight. I told her I don't think we can adopt Diana, that maybe another family would be better for her. "But she shouldn't be in an orphanage, right, Mom?" No. She added, "No child should be in an orphanage." Such profound truth in those huge brown eyes looking into mine. No, my daughter, no child should be without a family.

Our friend Kim called and invited us to her house to swim. It was a quick swim because we had that appointment, but it was nice Kim wanted to meet Diana and the girls had fun, of course, in the pool. Kim served us her fabulous homemade strawberry sherbet.

Diana was quiet and anxious on the way to the dentist, even though her friend Sergei was beside her. She didn't want to sit in the waiting room and went outside with a couple of the big girls. When it was her turn she grabbed my hand to go with her. She was truly very frightened and cried. She has many cavities and they will not be treated here. We don't have the resources for that, but even if we did, there is no time to do it since she leaves Monday. So I'm not sure why we even went to the dentist.

At home we had a little struggle. I was making dinner and Diana made herself a cheese sandwich with onions and cucumbers. But she wanted to eat on the couch. Fred said no and go in the kitchen. Diana said nyet. I wrote on the translation site that father said she must eat in the kitchen and that she is a good girl. She read it and went off to the bedroom and refused to come out. I checked on her and she was in bed. I told her "park." No, she didn't want to go. Maybe she thought it was the park from yesterday. I dug up a picture of the park we would go to tonight. It is very impressive and she was impressed. She jumped up and got ready. Almost like a toddler, I am heading off tantrums with distraction.

She still wasn't happy at the park. She wanted to go to the snack bar and couldn't understand why we couldn't get something. (It was closed.) She finally did eat her sandwich I brought with us. On the way home I stopped at the grocery store and bought her a box of the ice cream bars she'd wanted from the snack bar. Fred reminded her to eat in the kitchen and she did willingly. She wanted another and the other girls were done and had run off. So Fred and I sat in the kitchen with her while she ate it. She patted my arm, "I love you." She patted Fred's arm, "I love you, Papa." When we did our good-night kisses with all the girls, she pulled Liana into her arms and hugged her tight, then put Liana next to her on her bed on the floor and covered her up like she was one of the dolls.

Fred is dealing with this experience with anger at the world because there shouldn't be girls like Diana without a home and without hope, and anger that we can't step up to the challenge and take her. I just dissolve in tears.
Posted by Deb at 8:41 PM

Debbie, Diana knows love now, sadly not all children expierence this. I feel Fred's anger & frustration, but, we have to remind ourselves daily that Our Father loves us more. So so many children; some are used for unspeakable things..... Where is God in all this? He's there, we don't understand, we "MUST TRUST OUR CREATOR".

This has been a heartbreaking chapter in your life, yet you are doing God's will, turn it all over to Him, He is leading you & Diana too.

My prayers are for you. God bless you.