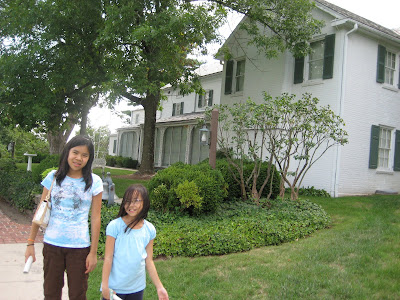 Fred had a chiropractic conference in Gettysburg so we went with him for a little vacation. The girls and I had a lot of time to spend together while Fred was in his classes.

Several people advised us to visit Eisenhower National Historic Site. It is the home and farm of our former President. I didn't really know much about Eisenhower except for the fact that he was elected to be President around the time I was born and that he directed the invasion of Normandy. I thought it was interesting that a great war general would choose to retire in Gettysburg.
We rode a tour bus through the battlefield to get to the private estate. The last time I rode a bus like this was in China. Today ours was equipped with a crying child, which reminded me of China even more. A tour guide met our bus and told us how the Eisenhowers had acquired these 180 acres for a mere $44,000 back in 1950. It was the only home they ever owned. After a brief talk outside, we entered the house. Arielle and I were in awe. We stood in a beautifully furnished, elegant living room. Large oil paintings hung on the walls and interesting and ornate artwork of every sort decorated the room. We found out most of the items were gifts from foreign heads of state. The guide said 99 percent of the furnishings in the house were authentic and actually belonged to the Eisenhowers. We were told they did not actually like this particular room and found it too stuffy. Then we were led to their very casual enclosed front porch that opened to the lovely woods and farmland that surround Gettysburg. Here we found out General Eisenhower entertained guests like Nikita Khrushchev and Charles De Gaulle.
The home was comforting and welcoming. I said to Fred, "I feel like I'm visiting my grandmother's house." Then I realized why I was so drawn to this place. The furnishings and personal belongings of the Eisenhowers came from the 50's and 60's. I started to recognize different items--the telephone! The old corded, dial phone. In my childhood home it was black. I even remember the number, written right on the phone in the middle of the dial, Temple 8-0848. "Old" friends, remember that? And the TV! Years ago we had one very similar to the one here. Those simple knobs to change the channel or volume--no remotes back then. Televisions were encased in a cabinets too, blond wood being popular. Summers at my home my mother and us kids watched Queen for a Day on our set while she ironed. What memories the old TV brought back.
In the kitchen I recognized the linoleum floor. I remember how it felt cool on my bare feet. And there was my grandmother's Revere Ware pot on the stove! It looked like the very same one. The old refrigerator resembled one we used to have. When the handle broke off my dad fixed it with some kind of epoxy he called "greenie." Even the white wicker hamper in the bathroom was familiar. I want to live here! It was an eerie walk back in time. But curiously, I was drawn to it. The warm feelings this tour brought was a reflection of the memories of my mother's love and care for us as children.
Outdoors we walked past a well-cared for rose garden and viewed the Eisenhower's old cars still parked in the garage. This tour was a fascinating look at another era and a glimpse into the lives of our former President and his wife. After the horrific stories told from the battlefields of Gettysburg, it was a reminder that this land has seen more pleasant times.
Posted by Deb at 6:30 AM