Years ago we used to host big celebrations on August 4th to honor Arielle's first day as my daughter. We toned down the festivities as she has gotten older. But every year I remember that day. It was one of the best days of my entire life.

My mother and I had flown into Hong Kong the night before. After a big dinner with nine other families in a fabulous restaurant that we couldn't really enjoy due to extreme jet lag, (there is a 12 hour difference in time!) we collapsed into bed at the hotel. But the next morning we knew we would most likely have our babies.

We were to take a short flight into China and then head to our hotel in that provincial city. We were beyond excited. It was impossible to predict the day's events. Couples who had adopted before filled us in but we couldn't imagine how it would be. I had never even seen my daughter! What was she like? What would she do? Would she cry when strangers took her from everything familiar? We would look different and smell different and sound different. She was 8 months old with big dark eyes and black hair. That is almost all we knew.

We boarded the Chinese plane as "Home on the Range" played over the speakers, which added to the surreal quality of the morning. I still remember looking outside the plane window as we were about to land, getting a glimpse of the country of my daughter's birth. China! A place I'd only read about, but now we would actually be walking on the ground. Unbelievable!

The heat was stifling, suffocating us with every breath. We piled into a bus with all our luggage and rode to our hotel. We tried to see the city from the dirty windows. First we traveled along rice paddies where water buffaloes waded and men with big straw hats worked in the hot sun. The city was crowded. Bicycles fought for road space, rolling alongside other buses and cars driven erratically. Small shop owners stood outside on the sidewalk eating watermelon. Soon we arrived at our luxurious hotel, a sharp contrast to the scenes right outside its doors. My mother and I opened up our room and saw a small wooden crib set up beside one of the beds. We both cried tears of joy and anticipation. A baby would soon lie in that little crib.

We were summoned to dinner and began eating a delicious meal around a large round table. Dish after dish was served on a lazy susan in the middle of the table. As we were stuffing ourselves, someone announced, "The babies are here!" Immediately we all jumped up from the table. We were told to go to our rooms and wait. We went to our rooms, but no way could we just sit and wait. All of us came back out into the hallway, chatting nervously with cameras in hand. Where were the babies? When would we see them?

Soon our facilitator came to talk with us and then came a parade of babies came down the hall. Women formed a line, each of them holding a baby. A young boy held one of the children. I didn't realize until later when I watched our video that this boy was holding Arielle. The caregivers waited patiently. Our facilitator called out a baby's name in Chinese. Then he said a family's name. A couple stepped forward and a baby was placed in the mother's arms. The mom cried. We all watched this private moment, snapping pictures. This family stood to the side of the hall. Then another baby's name was called. And then my name. I stepped forward and took Arielle. My own daughter. She was thin and her serious eyes were huge in her baby face. She did not cry. She just looked at me calmly. I hugged her and she lay her head on my shoulder. My own baby! What indescribable joy! I loved her fiercely right from the start. 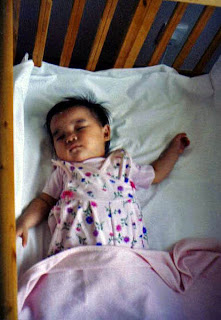 She was a tired little girl and half slept through her bath and dressing for bed. It had been a three hour bus ride from her town to our hotel. It was as if I'd never had a baby before! I didn't seem to know what to do. Without my mother, I don't know that I could have given her a bath. It took two of us to figure things out. I gave Arielle a bottle and put her in that little crib. My mother and I finally could relax enough to sleep. I awoke to a small cry at 3:30 am. I immediately sat up and the thought that filled my head was, "I have a daughter!" What a glorious day! What a gift this child was and continues to be! What a precious time to share with my own mother. The three of us were inseparable on this trip. Arielle loved her grandma and seemed to know we were her very own people. In no time at all she clung to us and cried if strangers approached. Even now, Arielle and her grandma share a special bond.

So today I look at my daughter who is too quickly becoming a young woman. Her eyes are still serious and thoughtful. She has her own ideas and is her own person. I am so proud of her. And I am so thankful she is my daughter.
Posted by Deb at 4:38 PM

How well you sum up that beautiful day, filed with emotions you did not even realize were yours. Happily because of you, I was able to repeat your trip a year later. It is hard to believe that so much time has passed since that wondrous day!
h